Both Nordsjaelland and especially Copenhagen will be very disappointed to have finished the season so far off the pace of this seasons title race which has been battled out by Brondby and Midtjylland. Monday’s hosts Nordsjaelland sit twenty-four points off top spot heading into the final game of the campaign, while Copenhagen are a further one point worse off. The two clubs do however have plenty to play for on Monday night as the result will decide who finishes third and fourth in the Championship Play-Offs section.

Copenhagen had gone five games without a win over Nordsjaelland until the pairs latest encounter in April. The hosts pulled off a 2-1 victory despite being a goal behind at the break, and left the winning goal until deep into stoppage time. Ghana forward Asante broke the deadlock and silenced the majority of the 12,542 in attendance with his thirty-seventh minute strike, which made sure Nordsjaelland held the half time advantage. The hosts saw lots of the ball but rarely seemed to trouble Rúnarsson in the visitors goal, but were back on level terms in the seventy-sixth minute through Falk. A draw appeared to be on the cards, but the eighty-third minute sending-off of Damsgaard for Nordsjaelland gave Copenhagen the impetus. The hosts pushed for a late winner and forced it in the ninety-fourth minute through striker Santander, who sent what was left of the home fans wild.

Neither side are in great form heading into Monday’s final day decider, but with three wins, one draw, and two defeats from their last six matches it’s Copenhagen who claim the title of form favourites. Nordsjaelland have only won one of their last six matches, picking up two draws, and three defeats, but their last two results have produced four points, while Copenhagen have lost their last two matches. Both teams have been scoring and conceding on a regular basis in recent weeks, with Nordjaelland’s 0-0 draw at AaB the only clean sheet in the pairs last twelve games combined. We’re expecting to see goals at both ends of the pitch, but see the points being shared on the final day, as three of the last six meetings between the two clubs have ended in stalemate. Both teams have scored in five of Nordjealland and four of Copenhagen’s last six matches and we’re expecting more of the same when the pair clash on Monday.

Marcondes leads the way with seventeen league goals for Nordsjaelland this season, but teammate Asante is just one behind his total and the pair will cause constant problems for the Copenhagen defence. Cypriot international Soteriou top scores for Copenhagen with fourteen goals in this seasons Superliga and could make the difference for the visitors on Monday.

We’re confident that both teams will score in this game as that has been a common theme in the majority of both clubs recent matches. The hosts have more scoring power, but Copenhagen hold a psychological edge, having already beaten Nordsjaelland this season. In terms of a final score, we’re backing the hosts to get the point they need to ensure third place and for the game to end 1-1.

These two teams have met fifty-two times before, and with an impressive 32 wins, 11 draws, and 9 defeats it’s Copenhagen who have dominated this fixture over the years. Nordsjaelland have only lost one of their last six matches against Copenhagen. 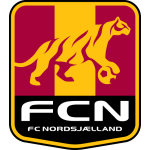 Croatian defender Bartolec returns after serving a one match suspension, while Da Silva and Frese remain sidelined through injury.

Pavlovic, Köteles, Keita, and veteran defender Antonsson are all expected to miss the final game of the season due to injury.