Twenty-nine points and six places separate Wolfsberger and Rapid Vienna ahead of their final day of the season clash on Sunday, but the hosts appear to be ending the season stronger despite being resigned to finishing second from bottom. Visitors Rapid can’t finish any higher than third thanks to their inconsistent end to the campaign which allowed Sturm Graz to secure the runners-up spot with relative ease. Wolfsberger have the home advantage on Sunday and will see this fixture as a chance to gain another of the top sides scalps after beating Sturm Graz 2-1 last month.

When these two clubs met for their reverse league fixture in March, hosts Sturm Graz thrashed Wolfsberger 5-1. An eighth minute penalty from Kvilitaia handed Wolfsberger and early lead and a four minute brace from teammate Veton Berisha effectively sealed the victory before the half time break. Kvilitaia netted his second of the game just four minutes after the restart, but then put through his own goal to make the scoreline 4-1 with eleven minutes left on the clock. Both Kvilitaia and Berisha avoided substitution and went head to head in pursuit of the match ball, and it was the Georgian who claimed the ball when he completed his hat trick in the eighty-ninth minute.

Wolfsberger head into the final game of the season against their guests as the form favourites, despite sitting far behind Rapid Vienna in the Bundesliga table. The hosts have won four of their last six matches, losing the other two, in what has been a positive end to the campaign for the divisions second from bottom club. Rapid Vienna have been inconsistent in the last six matches, picking up three wins and suffering three defeats. Both teams have looked strong going forward and yet at times weak at the back over their last six matches. We believe both teams have a great chance of scoring on Sunday as five of each clubs last six matches have seen both teams get on the scoreboard. This fixture has a recent history of producing goals at both ends of the pitch, with four of their last seven encounters seeing both teams score.

Gschweidl top scores for Wolfsberger with seven league goals this season, but the hosts are set to be without second top scorer Orgill who picked up an injury last time out. Schwab has had an impressive goal scoring season from Rapid’s midfield, netting twelve goals so far. Both Kvilitaia and Murg have scored ten Bundesliga goals this season and will provide constant threats to their hosts defence on Sunday.

We’re confident that both teams will score on Sunday as their recent results and matches against the each other have mostly ended the same way. Wolfsberger have the home advantage and their run of three straight wins suggests they could be inline for another three points on Sunday. As for a final score we’re backing Wolfsberger to claim a 2-1 against their illustrious opponents.

Sunday marks the twenty-fifth encounter between these two clubs, but the pair cannot be separated in the head to head record with each securing 9 wins, 6 draws, and 9 defeats. Rapid are unbeaten in their last four matches against Wolfsberger, with three wins and one draw. 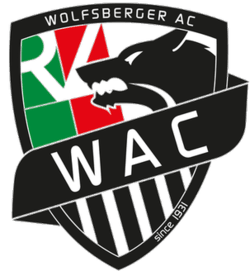 Leitgeb was sent off and Orgill went off injured during Wolfberger’s last match and neither will take part in Sunday’s final game of the season.

Bolingoli Mbombo, Kuen, and Kvilitaia all missed Rapid’s last game and are rated as doubtful to feature on Sunday.